What happens when you Meditate?- The Art Of Meditation 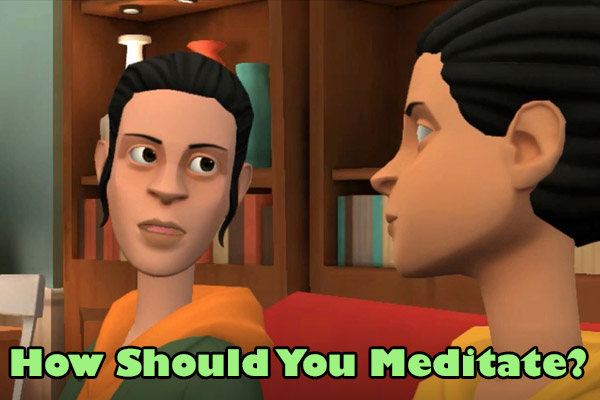 What happens when you Meditate?

The Art Of Meditation

Fahreen: Hello Sophia ! How’s you?
Sophia: Hey Good, how about yourself?

Fahreen: So, Sophia, how is your meditation going on?
Sophia: Not that great, I am unable to concentrate.

Sophia: I don’t know, I am facing too many problems in my personal and professional life because of which I may be unable to glide through or,…

Sophia: I am unable to control my thoughts during meditation which might be the other reason. I don’t understand why it’s so difficult to meditate?

Fahreen: It’s easy, you need to relax while you are meditating, it’s a natural process so let it flow.
Sophia: What do you mean?

Fahreen: I was talking about effortless meditation. The best way is not to put in any effort. Don’t worry at what point you have a problem. This is what meditation is. Meditation means exposing yourself to God’s grace.
Sophia: But, I have seen many people including seers and monks practicing it. If it’s that effortless then how will it work out?

Fahreen: At that time, you have to just watch your thoughts, but do not get involved into them. You will find gradually as the sun rises, darkness goes away and the sun’s rays go into every part and makes the whole place enlightened. In the same way, your being will be completely enlightened but if you put in an effort at that time or try to stop something within you it will not work out!
Sophia: But, Fahreen, how do I control my mind in order to achieve mental peace?

Fahreen: Many people try to control the mind. There’s a way of doing it that, “I’ll control my mind now.” Now, how will you control the mind? Only through mind. Either by ego or by your conditioning. You have no means of controlling your mind, because it is the mind which you have created, and that is just existing there, which you cannot control, though you might think, ‘I can control.’

Sophia: You have to go beyond this mind. And to go beyond this mind the most helpful thing is Kundalini power awakening. Because this power passes through your limbic area, pierces through your – fontanel bone area and just takes you away, out into the realm of reality – and the Yoga takes place between your brain, I should say, your heart, with this All-pervading Power, which calms down your mind completely.

Fahreen: What is Kundalini Awakening?

Sophia: Our germinating force lies in a triangular bone called as sacrum. This one is called in Sanskrit language as Kundalini. You can see with your naked eyes the pulsation of this Kundalini when Union with Divine happens. The awakening of the Kundalini also you can see as the rising of the energy you can see it. Not in all people. People, if they are simple, not so complicated, then the Kundalini rises just like a jet.

Fahreen: And what about diseases? Do they get cured?

Sophia: There are so many diseases which are more psychosomatic than the physical and these we call them as incurable such as Blood Pressure, Diabetes, etc., that can be easily cured by kundalini awakening because when this spiritual energy passes through our body she just strings our Energy Centres like pearls and get nourished. That’s how people get cured automatically by their own power.

Fahreen: Then, in that case simple meditation practice should be enough, why people should route for Sahaja Meditation? How is Sahaja Yoga different from other types of Yoga?

Sophia: Sahaja Yoga is different from the other types of Yoga because it begins with Self Realization, which is the awakening of our spiritual energy, that is, Kundalini.

Secondly, Sahaja Yoga is absolutely free of cost as you cannot pay to the Divine for spirituality. I mean- how much do you pay to the God for breathing oxygen?

Sahaja Yoga unites the essence of all religions. It is practiced in over 150 countries. Sahaja Yoga is the Last Judgement as described in the Bible. But this Judgment is so beautiful that when you are judged you get powers of your own, of your love; you enjoy the bliss of your Spirit; you become so peaceful, all the tensions disappear; you become so dynamic and the blessings of all the well-beings come on you. As Krishna has said “Yogakshema.” First the yoga, meaning Union with Divine and then the kshema, meaning, well-being. If you have not achieved your yoga the kshema is not bothered.

What Christ said, what Krishna said, what Muhammad said, what Nanak said, and what Moses said is nothing but Advaita, that is- “You have to become One with God.” But there are many who do not like it, they want to keep their personalities, so-called Ego, with them.

Sophia: Wow – you have a way with words. I am now more excited to follow Sahaja Meditation.

Fahreen: Give it a try, Sophia! It will work out gradually, as initially, even I had faced similar obstacles and doubts. I will be happy to help you out in case of any questions.

Sophia: Thank you for your kind support !