How To Be An EGOLESS PERSONALITY – Short Conversational story 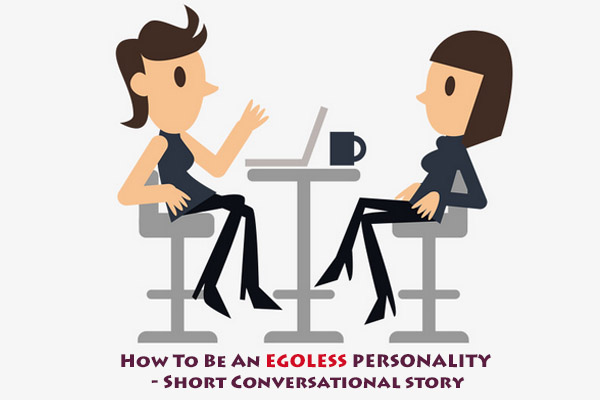 How To Be An EGOLESS PERSONALITY

(Few days later after her conversation with Farheen, Sophia started to practice meditation and slowly started to reap its benefits, but the cut-throat competition and a recent promotion to Sophia again started to create some problems in her meditation. Unable to concentrate, she decided to catch up with Farheen again to discuss on the matter…)

(Both Farheen and Sophia meet up in a restaurant )

F: Congrats Sophia ! I heard that you have been promoted. Good Job !
S: Thanks, Fahreen! Hard work has paid off eventually !

S; I needed some assistance from you.
F: Sure, how can I assist you?

S: I recently got promoted to a Deputy Manager’s position and have been assigned a team. This role demands a lot of brain storming, future planning and stretching beyond normal working hours.
All the tensions related to career goals and aspirations have led to change in my behavior as well. I have become a lot arrogant and egoistical because of which my current team is not liking me and without their support it won’t be easier for me to survive.
I used to enjoy it a lot initially. But from past few months, it’s creating a huge toll on my work life balance.
I’m unable to understand where did I go wrong?

F: It is quite clearly evident that due to hectic work schedule, you have overused your power of action and hence your right side became hyperactive and you became egoistical.

S: Power of action, ego, huh? I didn’t understand anything!

F: In our subtle system, there are two powers. By the first power, which is on the left-hand side, we desire. But by the second one, on right side, we go into action, and it’s called as kriya shakti. Now, when this action starts within us, it produces the by-products or we can say all the problems of these organs, which are to be deposited somewhere, and they get deposited in the brain as ego.

S: How did this horrible Ego develop?

F: Let me ask you what is the satisfaction that one gets out of doing any effort, this action? We go on doing some action, why should we do it?
After all, action means, any activity means exertion, botheration, problems, so best is to sit at home and do nothing of the kind! But we do not do that, we take up challenges, we rush up to it.

S: Because I get immense satisfaction by doing my work.

F: As a reaction to that, ego develops. If we do not have the ego we would not do anything – is a fact. But ego is the one that rationalises all our madness, the rat race we are running into.

If we did not have the ego we would not go into this nonsense. The more we try to rationalise our activities, the more ego develops to satisfy us- “All right, very good. Now you are a successful person, see? You have got this, you have got that.”
Lots of misunderstandings creep in when we pamper our ego like this – or I should say that when we are satisfied with our ego – that we really get lost. We get identified with our ego and not with ourselves.

S: How did I become so much egoistical?

F: So if you do some work very well: supposing you deliver a very good speech, then you would like people to appreciate.
If they do not appreciate you, you think you have done nothing, though you have done a great job. But still you will be so dissatisfied with yourself unless and until people appreciate you.
All of us have got this Ego sitting on our heads. When it starts bloating, the more successful you are, the worse it is. The more you indulge into planning and thinking, the worse it is. You can never realise that you are not that ego. Then you start feeling very nice about it, because everybody says, “Oh, what a great person he/she is.” The whole society develops on those lines.
But, a situation can arise where even when we have done nothing, we want to take the credit.
Then we call such a person egoistical who says, “I will do this, I have done this, I, I, I” – then we call him/her an egoistical person.

S: It would be better if you illustrate an example.

F: Well, in that case let me tell you a small story. It has been a great source of inspiration in India and hope that it has a similar effect on you as well. Have you ever heard of Shivaji?

F: Shivaji was a famous king, a true example of patriotism and chivalry.  who established the Maratha Kingdom in India. Once upon a time while reviewing a fort construction, Shivaji sees the diligent workers working around him and gets a thought.

He thinks that it’s because of him that the workers constructing the fort are getting food and shelter and He is the sole reason behind their survival. Enjoying the thoughts which were flooding his mind, Shivaji didn’t even realize that his Guru, Samarth Ramdas, who was a realized soul, has arrived there who was noticing him from some time.
Then, he comes near Shivaji, points a huge stone boulder and orders Shivaji to bring that boulder to him which he does, after which he says Shivaji to break the stone. When Shivaji breaks it, he sees a coconut which he gives off to his master. Ramdas takes the coconut, breaks it and a frog jumps out of it and disappears in woods surprising everyone in the process.

S: What an alive frog? But how is it possible the formation of stones itself takes millions of years, then how come there was a frog in it and who was supplying the air and food to him?

F: That’s how our devotion should be! We should work hard but never worry about the result because there is someone who will take care of the outcome, so be detached, meditate and sink yourself in that higher awareness.
F: The way you talk to others, the way you behave towards others, you will never understand, because there is ego. If you are standing in the darkness, the light is there but it is covered with something. So, humility must be embraced within you.

S: How do I get rid of this mess through meditation?

F: I can feel your right side is emitting hot vibrations.
F: So, I suggest you to meditate by sitting comfortably in a chair with your hands out on your lap, facing Shri Mataji’s photograph and placing your feet in a bucket of cold water that contains handful of salt.
This technique is called Footsoaking. Salt is added to the water to represent the earth element. In this way we use all 5 elements: fire (with the candle), air, water and earth. The element of water rinses away, and salt, carrier of earth element, absorbs away negativity. Vibrations are the key to helping these processes work.
Meditate for 10 to 15 minutes. You can say some affirmations such as Lord’s Prayer to cleanse your Agnya Chakra.
Devote yourself to that supreme force and try to be an egoless and conditioned less personality. Hope you realize it’s importance.

S: Hope I could imbibe it! Thanks for advising me.

F: Will always be happy to help!