Do you believe in Astrology or Karmic Debts? 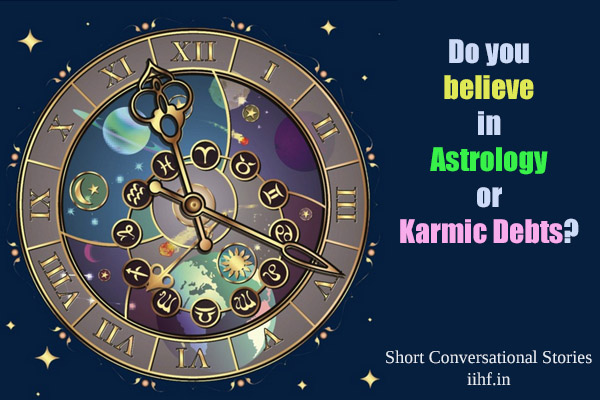 Do you believe in Astrology or Karmic Debts? –

Sitting leisurely on sofa at home.

NSY – You were mentioning about Karma – do you really believe in all this?

SY – All what?- The theory of Karma or Karmic Debts you mean?

NSY – Yeah! We are Science students – soon would be engineers bro – we should not even think of such amusing concepts! But you seem to be believing in all this karma – good, bad, ugly huh?!

SY – Why remember the film – Bruce Almighty – starring Jim Carrey? There was a scene where Jim was shown opening a drawer that kept his records – and the drawer kept opening – unending files of records!

NSY – Yeah – I remember, but that is just a film – for our entertainment – but real life is pretty much different! We got to be practical – life is not just entertainment!

SY – Films are often based on things we know of, on our beliefs, our collective knowledge database – in fact films deal with a lot of reality – they just make it funny so that we can be drawn towards theatres for some entertainment – but they do carry lots of messages – we can’t deny that! It is like sugar coated quinine – the bitterness of truth has to be hidden – just like revealing the truth through fables – otherwise humans get confused and even scared to some extent.

NSY – Are you saying that because of the film you believe in karmic debts!? Are you kidding me?

SY – of course not! We all know about the cycle of life and death – so much has been discussed about it in many books and religious scripture worldwide! Even the greatest Hindu religious scripture – The Bhagvad Geeta talks about it! Karma or karmic debts is discussed in many religions – maybe with a different name but the concept is all the same!

SY – The concept of karma that determines our destiny in each life.

NSY – In each life? Goodness! Don’t tell me you also believe in life after death!

SY – Of course! Why wouldn’t I? How else will Karmic debts be paid if we don’t take birth again? Okay tell me something – why does it happen that someone takes birth on the road side and begs all his life whereas elsewhere someone takes birth in a rich house with a golden spoon in his mouth!

SY – Destiny!? Who determines the destiny?

NSY – Yeah – that’s a million dollar question I often wonder about – this is sheer injustice I tell you !

SY – What is sheer injustice now!?

NSY – The fact that someone is born as a pauper whereas someone else is born in a well to do family – this is not fair really!

SY – Not fair!? Really? In first year when we joined, we were 65 of us – and now we are just 52 and they say that by the time we reach final year – there are chances of more drop outs and it is a record of this college that not more than 40 students pass out each year – it is so tough being here they say – so what do you have to say to his? Injustice?

NSY – No-why injustice? This is performance based assessment! Those who dropped out were not much focused in their studies – they were unable to get good results in each assessment so they had to be shown the door. We all know that if we don’t perform well, we will be asked to leave the college. We signed the bond too – that said we need to get 70% minimum in each quarterly assessment exam or else we will have to leave!

SY – But they all must have been bright you see – after all getting through this college itself is so difficult!

NSY – Yeah – but you have to show your competence constantly – which they failed to show – it was made very clear to us on our very first day that our performance better be consistent or else we will be shown the door!

SY – So you think it is okay to judge students on the basis of their performance?

NSY – Of course – one cannot be lackadaisical about ones career bro! Tomorrow they will be given responsible positions as Senior Engineers – if they show poor performance – the productivity of the organization that recruits them will go down – also our college’s name will be blemished too because of their incompetency! The reputation of this college needs to be maintained after all!

SY – So similarly my friend, the world order too works in a similar fashion!

SY – Meaning that every soul has his or her set of records maintained by some force above and based on these records, they are given a particular astral configuration that gives them a chance to redeem themselves! Thus for example, if a person was filthy rich in one life but he had become so by cheating & killing fellow humans around, then in the next life he will be shown how it feels like to be hurt and cheated – he may be born in dire poverty and will pine for every penny! This way astral configurations are set and thus we see such diverse combinations and permutations of life on our planet!

NSY – Oh! That is so dangerous! Records being kept per soul! How could that be happening? Sounds so impossible bro!

SY – Really? Initially we humans maintained records in papers & files and we had accumulated piles and piles of files – then we came up with more sophisticated storage systems & devices – floppy, cds, pen drives, nanochips and now clouds to store all information! So when we, at human level, could bring about such rapid changes to our storage devices – do you think the Divine Force – Almighty God – who has created over millions of living species on Planet Earth plus He only knows about probably other zillions of Universes He may be maintaining – will not be able to devise some system to maintain the records of His creatures?

NSY – Hmm….so can you, through your meditation, change your destiny? Because if you can’t and if you have to suffer for things done by you in even your past lives – then I don’t think there is any point of meditation at all!

SY – My dear – do you really think that our ancient sages and saints who found out about the subtle system, who found out the way to merge with the creator were all just passing leisurely time? Do you think you are the first one to think of this question in this world!? Obviously not! And of course we can change our destiny through connecting with the source that created us! Can you not purge the files of your hard disk at a single command – once you know how to do it? Once you are given the rights to enter the Administrative zone of the network?

NSY – Yea! I can! So in my meditation I get access to my files of previous births?

SY – (smiling) It is not so easy as I am making it sound to you my dear – but yes – when we meditate, we awaken the coiled spiritual energy lying dormant within all of us. This coiled energy is called the Kundalini Shakti in Sanskrit language – Sanskrit is the mother of all languages – you must be aware of it?

SY – So when She rises, She does our cleansing – not just at our bodily level but also of our soul and spirit levels too.

NSY – I see. So what is the use of the astral chart then? We can do without it then?

SY – Well, till the time you come across this divine wisdom and manage to awaken the divine energy and cleanse your subtle system – you have to be under some system right? You see each astral body – that carves our life quality on planet earth – is also governing the energy centres – also known as chakras – in our subtle system. So when the Kundalini Shakti awakens, she even can purge the malefic affects of different planets and the practitioner can watch his own life changing at a very rapid rate!

NSY – Quite interesting huh! Have you seen your life changing ever since you started practicing meditation?

SY – Oh yes! I am a totally changed person bro! Had it not been for this divine miracle in my life – I would have been lying in some drug and alcohol rehab institute all my life!

NSY – What!? You into drugs? Unbelievable! Can’t believe someone like you even went near drugs! Tell me more about it!

SY – I will. Not today but surely some other day! Catch you up later. Bye.