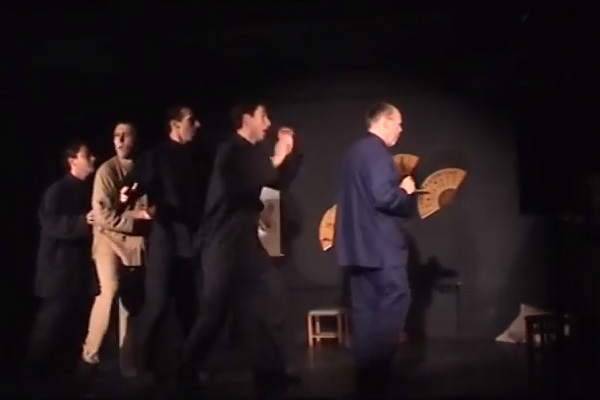 A Zen master has a reputation of being imperturbable. His student monks decide to put him to the test. Written by and featuring Nicholas Granby and Ivan Ottaviani. One of the short sketches from the Theatre of Eternal Values production “Zen-Sations”, recorded at the Edinburgh Festival Fringe, the first time Zen stories have been adapted for the stage.

This is the first time tales of Zen Masters and monks have been adapted into a series of theatrical sketches. They stun the mind with their humour and wisdom of universal truths. With tricks, japes and jokes egos are deflated, the vain humbled, and the proud brought low on their road to Enlightenment.

“These ‘sketches’ each have a moral, a type of punchline, that have the aim of bringing the thinking mind to a stop, similar to Zen meditation, when one can then experience direct ‘oneness’ with our Inner Self”.

The show was performed from August 7th-21st, 2004 at the Alba Theatre, Fringe Festival in Edinburgh, Scotland

IN THIS theatrical equivalent to the Little Book of Zen Wisdom, the highly polished Theatre of Eternal Values present their tales of Zen monks with wit and panache. A snappy pace and tight direction leads to a fun 50 minutes – though I suspect enlightenment itself probably takes a little longer. Recommended for those who like to sit on their ankles.

The complete guide to the Edinburgh Festival

Escape the Festival! Let a group of monks take you to a higher level. Don’t worry that a play about Zen sounds a bit, well, new-agey, this team from Italy perform ancient tales of Zen with so much enthusiasm and good-humour that it is impossible not to enjoy it. It also reveals some wise truths about human nature. Simply put together using a brilliant cast, basic props and the audience’s imagination this play makes you think, and it makes you laugh, a lot. Go along and be surprised. Zen really wasn’t my kind of thing, now, it just might be.

Source – The Theatre of Eternal Values