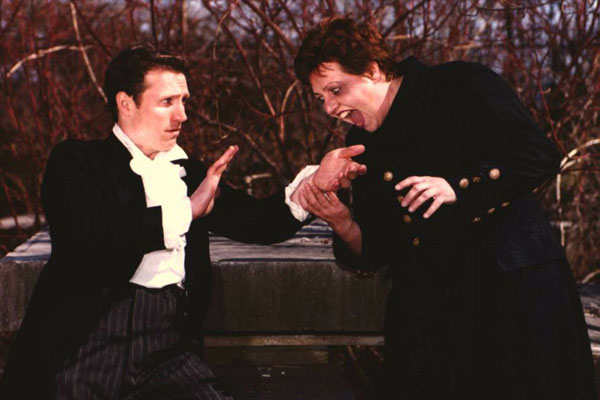 The story of the scholar Faust, a master of philosophy, law, medicine and theology, has fascinated mankind across the ages. Goethe’s philosophical approach to this story includes the element of love and the saving power of women. The more Faust knows, the less satisfied the feels. As his discontent grows, he begins looking for answers outside the boundaries of conventional wisdom. He calls on the spirit world and Mephistopheles, the Devil, appears. He offers Faust great rewards if he signs a contract with blood. Faust agrees to the bargain and the journey of temptation is born.

“The vacant Mind
Has Truth assigned
It comes to him unbidden”
(Faust, Act I)
by Johann Wolfgang von Goethe

Faust is a seeker of truth, He is aware of the uselessness of this own intellectual knowledge and yet he is blinded by the ego he has acquired through his studies. The Devil, who plays with the ego of man, easily finds a doorway into his soul. He creeps in slowly, formulating a complex web of intrigue and temptation until Faust becomes lost… but the Devil meets an unexpected obstacle in the innocent peasant girl Gretchen. Goethe’s inclusion of Gretchen’s story was inspired by a real life-story he had heard which affected him profoundly: the story of a young woman seduced and abandoned by a nobleman, who kills her illegitimate child and is condemned to death. Goethe shows her repentant and, ultimately, redeemed.

This allegorical poetic drama, set in 18th Century Germany, is the ideal context in which to explore the dangerous path of an awakening consciousness, the exalted ambitions that can lead to self destruction, and the profound impact of innocence and simplicity in the struggle against our darker selves, This performance merges comedic elements with the Faust story giving balance to this powerful drama.

Source- The Theatre Of Eternal Values