What is humanity? Is it human nature? – asked Lao Tzu! 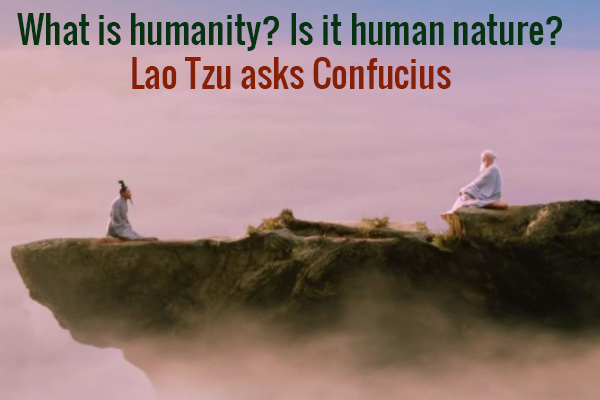 What is humanity? Is it human nature? – asked Lao Tzu!

Confucius and his disciple Gent-Road, left their books in the hotel and rode on horseback to the hilly suburban area where Lao Tzu was said to have retired to. Since it was far away from the capital, the two set off so early they passed the city gate with a few stars twinkling overhead. Confucius was so happy when they reached the hilly suburb. There would be plenty of time to consult this senior scholar. Confucius had many interesting topics in mind to discuss with Lao Tzu. But it was a much more difficult task to find Lao Tzu’s house than they expected. Nobody seemed to know this former curator of the royal library or where he lived.

They were first directed by some local residents to a few mansions of government officials but none of them had the slight traceable link to Lao Tzu. Of course they knew of Lao Tzu but their minds seemed to be blanker than their faces as to the whereabouts of this former curator. It suddenly dawned on Confucius that Lao Tzu as a modest person must have chosen a plain house in which to live. They began to look for ordinary houses nearby but this turned out to be equally disappointing. The hosts had never heard of Lao Tzu’s name. But some had met an immortal man with the white hair of a hundred years but the glowing face of middle-aged man, and he was able to chat with animals. He lived deep inside the woods. Gent-Road urged his master to give it a try. He wanted to see this strange man even it was not Lao Tzu.

When it was getting dark, the two had long left their horses trudging through the dense woods on foot. They had found neither the immortal man nor Lao Tzu.

The bitter experience of their wandering years helped them to endure the physical fatigue and manage their hunger with wild fruit and eatable herbs. Confucius and his disciples had visited one state after another for 14 years to promote their political ideology: They were out of food for about a week on one occasion and encircled by hostile armed men for five days on another.

If heaven’s Tao had prevailed, we would not have needed to torture ourselves like this, Confucius would often say. This time the two had to turn back with nothing accomplished except their exhaustion. To make it worse, they lost their way and did not even know which direction was the way out of the endless woods. Heaven sympathised with them by showing a hatched hut in distance. It must be a convenient lodge for hunters who occasionally stayed there overnight. They crossed their fingers that there was somebody inside.

When the hut was near they saw an open area in front of the hut which must have been cleared out as a yard. In the middle of the yard there was a withered tree. The crown was gone, only the dead trunk stood there with cracked bark covered with whorls and branch knots. It had been an old tree, perhaps, a thousand years old.

Their faces both lit up when they saw a glittering light coming out the door. It might be Lao Tzu’s home since they saw books in the dim light. To avoid frightening Lao Tzu at this late hour, Confucius backed off three steps and then bowed towards the hut with his hands clasped: “Please pardon me for venturing to ask if Master Lao is at home?”

There was no answer. Gent-Road led the way inside: Under the light of an oil lamp on the table, the room seemed large and neat. A deer shook it head at the two strangers beside a large bed half occupied by piles of books, and then stood up and quietly, went out. A stove and other cooking utensils were in the corner. Clothes, and other odds and ends hanging on the wall. Before they finished scanning the room, there was a sonorous voice from the yard:

“Is that Con Chu ? (Confucius’s name) Please come out.”

Once outside, Confucius and Gent-Road saw nothing of the withered tree trunk but a godly old man standing in its place. His gleaning silvery hair covered his ears and draped down into his long beard covering his chest. His grey robe shifting in the dusk breeze was like the bark and twigs of a dead tree.  Confucius’s heart tightened to notice Lao Tzu’s face was even younger and healthier than his. Lao Tzu had warned Confucius many times not to tax his energy and prematurely age by muddling in world affairs. Confucius heard himself saying: “Master Lao, I must have been dazed by the dim light but you looked like a withered tree trunk when we came.”

“I have just travelled to the primitive state of our universe, before the Big Bang as it will be called. Birds kiss each other, fish blow water. I have not seen you for a while since you have become so famous. You visited 72 states and spoke to their kings. What is your doing today?”

“I have a cart of books,” Confucius replied, “books on the six classical arts: rites or propriety, music, archery, riding, writing, and arithmetic. There are several copies of the five classics: Collection of Ancient Texts, Classic of Poetry, The Rites, The Book of Changes, and The Spring and Autumn Annals.”

“Can you give me a summary of what those books are about?” Lao Tzu asked.

“What is humanity? Is it human nature?”

Lao Tzu said, “If humanity is the nature of human beings, there is no need to write a cart of books to preach about it. If humanity is not human nature, how many carts of books you have will not be enough to squeeze that information into the human mind.”

Confucius wanted to elaborate upon his worthy books but Gent-Road saw Lao Tzu’s dismay at Confucius’s lengthy speech and cut in.

“Master Con has a cart of books and seeks your help in storing them in the Royal Library, since the political situation of State Lu is unstable.”

Lao Tzu asked, “Have you asked the current curator?”

Confucius admitted that they did ask him, but he refused.

Lao Tzu said, “The current curator is my choice for the position and has the royal appointment. How can you suspect that he does not tell the truth when he says the library is full? Those who presume to preach humanity only become hypocrisy: You are ready to suspect another’s honesty. Are honesty and trustworthiness part of your humanity and justice?”

When Confucius and Gent-Road left Lao Tzu and his hut, they looked back and again they saw only a dead tree trunk in the front yard. Gent-Road wanted to go back and ask if pretending to be a dead tree was hypocritical. Confucius stopped him.