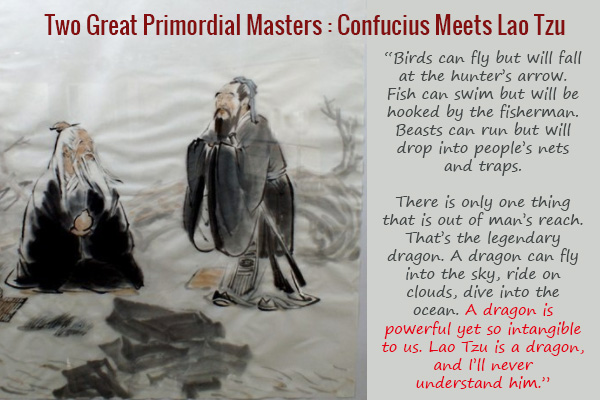 A flush of warm memory came to Confucius’s mind at Gent-Road’s mention of Lao Tzu’s name. When Confucius first saw Lao Tzu in 518 BC, he was young, thirty four, and Lao Tzu as a nationally renowned scholar, and looked much younger than his advanced age.  When Confucius stepped down from his cart at the capital city gate, it was a surprise that Lao Tzu, a high official of the royal court, came to welcome him outside the city wall.

According to the custom, Confucius brought Lao Tzu a large wild goose as a gift. Lao Tzu admired this young scholar’s thoughtfulness and his eagerness to learn. Lao Tzu remembered so many details of the imperial rituals, and he even knew how a funeral procession should proceed if a solar eclipse happened to occur.

With Lao Tzu as his host, Confucius literally buried himself in books for days on end in the royal library. Books were a rare possession of a few privileged people, and Confucius had never seen so many books before. It opened his eyes, and laid the foundation for his career as an educator.

At the farewell party held at the city gate, Lao Tzu said to him in a soft and clear voice, “Men of wealth give money as a gift on such an occasion while men of virtue and knowledge give advice. I had neither money nor virtue. Let me pretend as a man of knowledge only for the moment to say a few words to you, our honourable guest, Confucius.

Firstly, what you are studying and teaching now is all from ancient men, who died a long time ago and even their bones have rotted away. Those written words are in fact only their footprints, neither their shoes nor their feet, let alone what was in their minds. Don’t regard their words as some sort of unbreakable dogma.

Secondly, as a man of virtue and knowledge, you can have your own cart and live a luxurious life. If the time does not permit, it will be perfectly okay as long as you can manage to survive.

Thirdly, once I was told of an old saying: a good merchant does not show his goods and a man of utmost virtue is always simple. It will do you good if you cut off your pride, get rid of your greed, reduce your haughtiness, throw away some of your ambitions. It will serve your family better, and it will serve your state better if you are not too stubborn no matter whenever, wherever, and whatever.”

Confucius was puzzled at the first few words and felt totally lost when Lao Tzu finished his speech. At one point, Confucius had determined to ask all the questions to get to the root of the matter. But at the end, Confucius seemed to be shrouded in thick fog and nothing was clear. He knew neither what to ask nor how to ask. His heart was still pounding, ears humming, and his throat choking when everyone at the party had dried their cups and were saying goodbye.

Was this really the same Lao Tzu whom he had stayed with in the last few weeks in the capital? Lao Tzu had been a kind, warm, and often humorous, old gentleman, treating him as his own son. There had always been a full answer whatever Confucius’s question was.

When Confucius was on his way home with the capital in the distance, a few men were hunting on horse back. A duck fell from the sky at the release of the bowstring. It suddenly dawned on Confucius who recited slowly,

“Birds can fly but will fall at the hunter’s arrow. Fish can swim but will be hooked by the fisherman. Beasts can run but will drop into people’s nets and traps. There is only one thing that is out of man’s reach. That’s the legendary dragon. A dragon can fly into the sky, ride on clouds, dive into the ocean. A dragon is powerful yet so intangible to us. Lao Tzu is a dragon, and I’ll never understand him.”