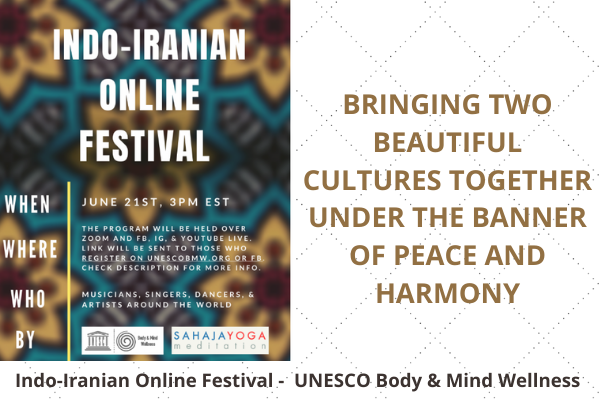 To all UNESCO Indo-Iranian Festival attendees,

UNESCO BMW offered the online Indo-Iranian Festival on June 21 as an act of love for bringing two beautiful cultures together under the banner of peace and harmony. And in so doing, since Sahaja Yoga is a partner of UNESCO BMW, the well-respected Mr.Sanjay Talwar, the founder of NGO -Immaculate Ideal Human Foundation, participated with his brief presentation of Shri Mataja, the founder of Sahaja Yoga in an upmost dignified manner. Afterwards, he sang a universally enlightening song, Jago Kundalini Maa, to uplift the self-awareness of all of the attendees.

Many participating Artists were practitioners of Sahaja Yoga, who with their enlightening performances, brought benevolence for all & offered the basic tenets that our body stands for in its quest to serve mankind with World Peace & Inner Awakening.

UNESCO Body and Mind Wellness would like to express gratitude to Mr. Talwarand all Sahaja Yoga artists for participatingin our festival. Their contributionsand talentsbroughtus one step closer to our goal of world peace,and brought joy to many families around the world.

UNESCO BMW offered the online Indo-Iranian Festival on June 21 as an act of love for bringing two beautiful cultures together under the banner of peace and harmony. And in so doing, since Sahaja Yoga is a partner of UNESCO BMW, we softly and respectfully brought awareness of Shri Mataji and Sahaja Yoga to the forefront of all attendees of this Festival that were not Yogis. Well respected Yogi Sanjay Talwar presented Mother in an upmost dignified manner which included Her photograph being viewed. Afterwards, he sang Jago Kundalini Ma to give Self-Realization to those subtle enough to receive it.

On a more mundane level, UNESCO BMW did not pay any performers for their artistic offerings, but we did offer letters of appreciation. Secondly, all organizers for the Festival were a combination of Yogis and non-Yogis. NONE of them got paid AND that includes the CEO and Treasurer of UNESCO BMW.

They all worked as heartfelt volunteers, believing in the high ideals that this Festival attempted to propagate in a secular way. This was a well-received first attempt and certainly there is room for improvement. But, before the Feet of our Divine Mother, Zohreh Rezazadeh and Steven Marchitelli declare that no financial impropriates were committed and that no selfish motives drove our decision making.

All the best for the upcoming Guru Puja!
Loving regards,