The Science of Serenity – By R.Venkatesan 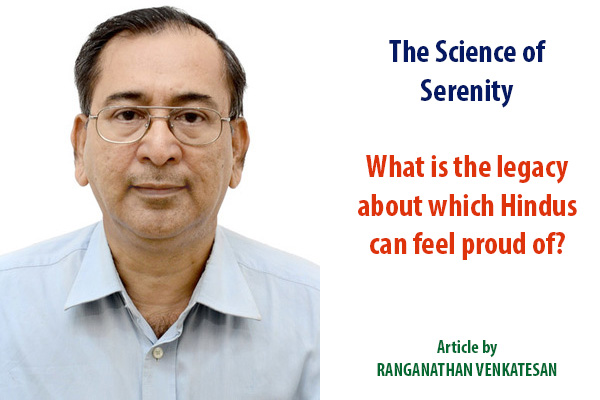 The Science of Serenity

What is the legacy about which Hindus can feel proud of?

Hinduism has no founder, no religious organization and no concept of heresy. It does not attempt proselytization or conversion. Swami Vivekananda at his address at the World’s Parliament of Religions in Chicago on September 1893 announced that he was proud to belong to Hinduism, the mother of all religions which has tenets of tolerance and universal acceptance. He was representing the millions of Hindus who like him felt proud to acquire the famed religious legacy. What is the legacy about which Hindus can feel proud of?

The three Religious writings- Rig, Sama and Yajur Vedas antedate all other religious writings of the world barring Egyptian Book of the Dead and experts place their compilation at 2500 to 2000 BC,when no organised religion existed Out of the Vedas grew the Brahmanas and Upanishads and Upanishad’s central theme is the pursuit of reality. Upanishad’s study of self evolved between 1000 BC and 300 BC. Yoga formulated by Patanjali, to give knowledge of the reality, was advocated in the Upanishad. Bhagvad Gita which is often referred to as the sacred book of Hindus evolved around 400 B.C. and experts find a parallelism, sometimes verbal between its teachings and those of the New Testament. Aphorisms of Patanjali (formulated by 200 B.C.) contains the best and loftiest exposition of yoga teachings.

While the present day conceptions about the mind and consciousness does not go beyond the ability to perceive through the senses as the result of bio-chemical processes of the brain, Hindu philosophers had believed that Kundalini provides the only channel to explore the mind. Kundalini, according to them,was the super intelligent energy behind consciousness and therefore the evolutionary mechanism that determines the capacity of brain. Indian scriptures refer to man as a conscious animal and not as a rational being. Rational economists occupy “empty” office cabins; consciously evolved professionals would not regard them as empty cabins but with strong signals to get online quickly with dongles or signals to enable use of ”mifi” (mobile phone with mobile wifi )

Indians anticipated most of world’s discoveries in the Middle Ages

Hindus can take pride in the fact that Indians anticipated most of world’s discoveries in the Middle Ages. They invented chess and decimals, The decimal system was known to Arya Bhatta (AD 476) and fully described by Bhaskaracharya (AD 114) long before it appeared in the writings of Arabs and Greco-Syrians. The value of π and the method of calculating the area of a circle were known in India nearly a thousand years before they were discovered in Europe in the fifteenth century, and an Indian mathematician proved that x/0= infinity, five centuries before the Europe came to the same conclusion. I can quote endlessly the rich legacy left by Hindu philosophers about which Hindus in the current period can feel proud of

The philosophy of Hinduism as brought about by fables and folk tales are traced by Heinrich Zimmer (1951). The following fable illustrates the philosophical underpinnings of Hinduism. The story is of a time when a queen of a small kingdom, longing to greet the sage, her husband’s brother, takes a vow that she would fast until she feeds the sage next day morning. When she bade farewell to the king, her husband, little did she realize that the river, which separated the forest (where the sage meditated from the city (where her husband ruled), would be in spate on that night. Worried at the prospect of breaking her vow, she approaches her king for his counsel. His counsel was simple ”Invoke the goddess of river; speak to her and tell her that if the king –her husband –had lived a chaste life till that day, the river should give way”. Although not comfortable with the counsel, she obeys her husband and speaks to the river. The story proceeds to inform that the river tossed up its water to its left and right paving the way for her troupe to cross. Bewildered she asked the king, on her return,” How could you call yourself chaste when you fathered my children ” King smiles and explains the concept of satya(truth) and “ananya bhakti” and the need of an enlightened soul to maintain an “outer balance and inner harmony” He said you can be connected to the God and still perform all “worldly duties” with a detached involvement. Raja Janaka’s zeal to serve the people of his kingdom while not deviating from his attention to the almighty, form a set of popular folk tales. The fables and folk tales explain the power of satya or truth and the need to maintain outer balance between social, family, career and material aspects of life as well as maintaining an inner harmony between body, mind, emotions and spirit.

The “connection” or the union of atma with the paramatma is a vital concept in the Indian philosophy. The word yoga is derived from the Sanskrit word Yuj meaning to join, referring to the union of self with the All Pervadimg Power. Ancient scriptures mention that a true knowledge of self leads to the highest point of yoga. Hindu philosophers for centuries had traveled the road to self-knowledge.

During 1989, I came across writings of Mataji Nirmala Devi, the founder of Sahaja Yoga where she had urged people to transcend from a “ knowing state” (knowledge about the legacy, philosophy, Gita principles) to a “being state” or a Stith Pragya, state of a realised soul. She invited seekers of truth to come and experience it on their central nervous system. I was confused. I was not sure whether I was seeking truth or what I would do with it? The utility of becoming a realized soul was also hazy to me, to start with.

After achieving self-realisation, I could understand by using vibratory awareness seek truthful answers to questions such as whether light is a wave or particle or whether the evolutionists who favour Darwinian hypothesis, skillfully avoided the state of evolution of the human brain?

Mataji Nirmala Devi, born on March 21, 1923 to a Christian family, married to a distinguished civil servant and who followed the Hindu philosophy of outer balance and inner harmony to the core, discovered the process of giving en-masse self-realisation at Nargol on May 5, 1970. She elaborates: “The three dimensions in which we normally exist are physical, mental and emotional , and the fourth dimension is spiritual. This is also called Turiya state through which one attains higher awareness. At the human state, our attention is on food and security… it transcends to intelligence (referred to as IQ in the area of intelligence)…to emotional state (compassion-normally referred to as EQ )… and to a state of seeking beyond human understanding (referred to as SQ )” .In the Turiya state of higher awareness one can obtain a desirable alternative for the soul by drawing a decision tree of all mutually exclusive but collectively exhaustible options available for adoption!

What is Sahaja Yoga Meditation?

Sahaja yoga meditation is the practice of entering a higher state of consciousness that transcends the thinking mind and elicits the state of thoughtless awareness on a regular basis which can be verified on central nervous system. According to a Pew survey, percent of Americans having no religious affiliation reached 20 in 2014; out of this some 33 per cent said they do not believe in God, an 11 per cent increase since only 2007. May be, transcendence to a higher state of consciousness using yoga and meditation as an add-on to their existing religious practice is the way forward to this segment of population!

R. Venkatesan is a Senior Consultant at NCAER. Prior to this he was Senior Fellow and Head of Industry Division at NCAER. Earlier he had held various positions with the Government, academic and private sectors; he was a consultant at the Planning Commission, a faculty at the Administrative Staff College of India and a senior project Economist at MN Dastur & co.

His research interests include Social Cost-Benefit Analysis, Earth Sciences and Economic development, Information & Communication Technologies – e-Readiness & e-Governance. He has a number of publications to his credit in national and international journals; he has also published four books and nine working papers in his areas of interest.

2 thoughts on “The Science of Serenity – By R.Venkatesan”