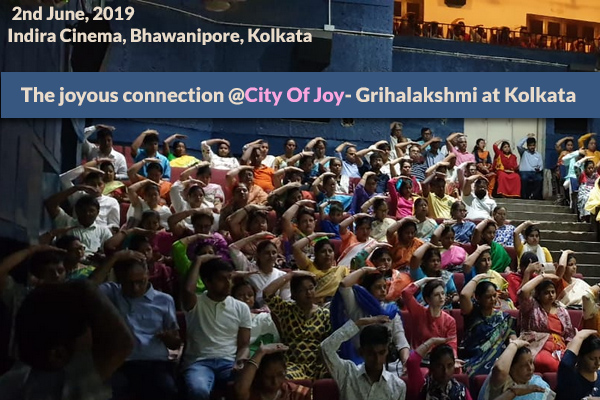 The joyous connection @City Of Joy- Grihalakshmi at Kolkata

As we, the Sahaja Yogies, are trying our best to spread the true and authentic spiritual wisdom of Sahaja Yoga pan India, we decided to try a new and unique way to reach out to more and more people through Edutainment!

Grihalakshmi – The Awakening is a film that was created in a way to introduce Sahaja Yoga and the teachings of Shri Mataji Nirmala Devi to maximum number of people in an effective way. We all know how humans crave for entertainment – esp. with Internet and several options available to humans – so we decided to merge both education and entertainment together in order to reach the divine sublime message of God to many people in  short period of time!

The film is produced by an NGO-  Immaculate Ideal Human Foundation (iihf.in) that is run mostly by Sahaja Yoga Practitioners. After the film (that is about 1 hour, 10 mins) we give the opportunity to the viewers to feel the bliss of divine vibrations! Many seekers got their self realization because of this film!

Here are some pictures that captured the joy of seekers getting their self-realization:

Watch a short film clip on after film Self realization Program: