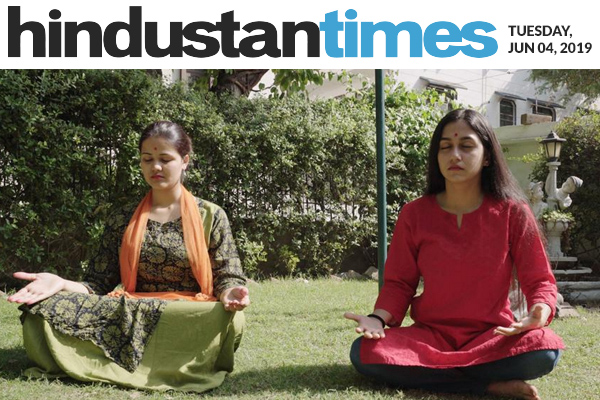 A film on meditation and yoga, shot in the city

The recently released film Grihalakshmi: The Awakening, introduces Sahaja yoga, and urges one to sow the seed of happiness by shunning negativity, and being grateful.

Sisters Sheetal and Samaira are caught in a cycle of envy, often quarrelling over marriage prospects that come for the younger sister before the elder one. Life seems tough and chaotic. Amid the chaos, they get on a journey of spirituality and meditation, which helps them manage their lives better. That’s how the film Grihalakshmi: The Awakening, pans out.

The film talks about Sahaja Yoga meditation and follows the lives of Sheetal and Samaira, traversing through life with the power of meditation. The 73-minute film, directed by Arvind Pandey was shot over a span of 10 days in the city and has been running successfully in Delhi-NCR, Madhya Pradesh, and Mumbai. It will be released in all parts of India, eventually.

The inspiration for this film came to producer Sanjay Roshan Talwar, whose life transformed after being introduced to Sahaja Yoga 35 years ago. Talwar, having spent his early years with Shree MatajiNirmala Devi, learnt a technique to raise an inner power called the ‘kundalini’ and wanted to bring “positive cinema” to
the masses.

A still from the film, featuring producer Sanjay Roshan Talwar.

“Our cinema shows you 80% negative [content]. I wanted to bring fresh content. The story was built in a way that [shows that] women in your life are very important. I showed how strong a woman can be. And the best part is that people actually want to meditate after watching the film,” he smiles.

“Slowly I found the bad things leaving me, and the good things coming my way. Each man is seeking a better life, but he doesn’t realize that the real seeking comes from connecting with the cosmic power. Sahaja yoga raises your Kundalini with your pure desire. You can correct your chakras, as they control your personality. There are issues that one is not able to tackle. But with this meditation, you can handle them,” says Talwar, the managing trustee of the Immaculate Ideal Human Foundation.

And while we are at it, we ask him how one can control their thoughts. “This meditation can only happen when thoughts in your mind subside. Thoughts of the past and the future bombard us without us even asking for it. The centre is what is important in Sahaja Yoga, which is the present. It’s the path of evolution, which exists in the central nervous system. The energy that came to us at birth, splits into three sides, and it’s remnants lay inside at the spinal cord at your base in a triangular bone called the sacrum bone,” he explains.

Talwar has also sung devotional songs in the film, which concludes with a working woman coming home from work, and her children and husband receive her happily.

“I end it showing that everything revolves around her, the Grihalakshmi (the homemaker),” he concludes.

Interact with the author on Twitter/@Nainaarora8

One thought on “Hindustan Times – Article on Grihalakshmi, The Awakening”