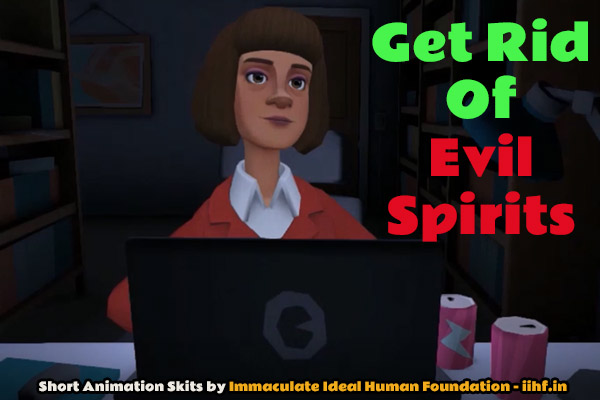 Witch: Don’t you dare ask me this silly question?

Ms. Green: Are you evil spirits? What are you doing here?

Ghost:I am also here. Never underestimate the power of DEVIL!I have Superpowers that you ordinary human beings do not possess.

Witch: We have been in this house for more than a century now, don’t you feel bored here?

Ghost:Yeah ! I feel frustrated here. But, what can we do our son has not performed the last rites yet..people say RIP, but how can we rest in peace?

Sophia: Hey, I am looking for buying a house, desperately.

Karl: I know a person who can help you out to get an awesome house. He’s a real estate businessman.

Sophia: I would like to meet him tomorrow then, preferably during morning hours.

Sophia:I’m good. My friend told me that you are in search of someone who can buy your mansion.

Businessman:Yeah! I’m in a great hurry to sell this house. I am thinking to invest the money obtained after selling this house in stock markets.I know that you work in highly esteemed multi-national company Symbiosis Associates at managerial position. So, it would be feasible for you to buy this house.

Sophia:I strongly agree with you.

Sophia: Karl, the owner of the house appeared quite awkward to me. I don’t understand why did he wear black sunglasses in the hotel. Also, why did he come too late in the night?

Karl: Yeah! Sometimes I too feel the same. But, I’ve accustomed to his strange habits.I’ve never seen his eyes from past many years. He never gets out of his home in sunlight. I’ve heard when he was young, he was always joyous. But, I wonder what happened to him when he grew old.

Karl:But, why are you so bothered about that old man? Anyways, you will have to live alone in house and come for job. I bet he is selling you the house at very cheap price than the market cost. You should not think too much now and strike the deal in your favour as soon as possible.

Sophia: Exactly, infact I will buy this house today itself !

Maria:You are a Sahajayogi. Did you check the vibrations for this house, before taking the decision?

Sophia:Oops! I forgot to do so.

Maria:Yesterday at party in your house, I was getting hot vibrations on my palms. I warn you to be cautious. I guess, there is some thing odd out there.

Sophia:Yep, I too heard some rumours that this house is haunted for past 10 years.

Maria:Also, your neighbour told me that the house owner was very tensed since the day he bought it, as the reputation of this house in the society was really bad. Many people have been found dead in that house since time immemorial. In the most recent case, one of the paying guest was found dead suspiciously in that house, a decade ago. Since then, nobody was willing to stay in this house and hence eventually you were sold this house at a much cheaper price than the market trend.

Sophia:Okay, now I understand the selfish motive behind this move by house owner.But, nothing can be done now. I’ll have to stay in that house only as I’ve signed all the documents, already.

Sophia:I can feel the presence of someone here.

Sophia: Oh! Now I get, you are the one who has been troubling the people since a century.

Ghost:Shut up! You silly girl! I will finish you off within a second.

Sophia:I’m a Sahajayogi. You can’t do anything wrong with me.

Jai Shree Mataji ! Oh Goddess, please awaken the powers of Shree Durga within me so that I can fight the negativity surrounding me.

Disclaimer – Because of the constraints of the animation software, we showed fist fighting with the evil spirits. In reality we make use of the fire element to get rid of the evil spirits haunting a house or possessing somebody. There are many kriyas (techniques) present in Sahaja Yoga with which we can drive away negativities from our system to lead a happy, optimistic and progressive life.