The significance of the Faravahar or Asho Farohar 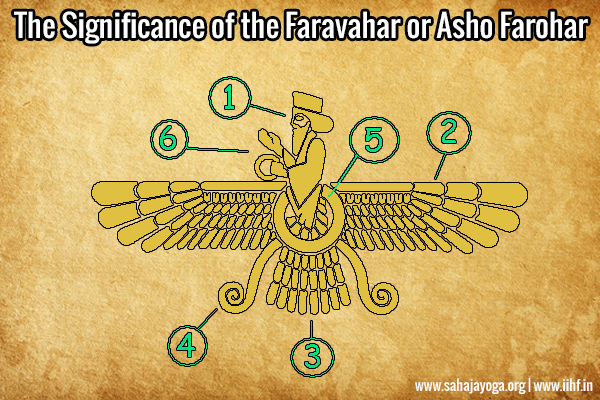 The significance of the Faravahar or Asho Farohar

1. The figure inside is that of an old man, representing wisdom of age.

2. There are two wings in two sides of the picture, which have three main feathers. These main feathers indicate three symbols of “good thoughts, good words, and good deeds,” which are at the same time the motive of flight and advancement.

3. The lower part of the Faravahar consists of three parts, representing “bad reflection, bad words and bad deeds” which causes misery and misfortune for human beings.

4. There are two loops at the two sides of the Faravahar, which represent positive forces and negative forces. The former is directed toward the face and the latter is located at the back. This also indicates that we have to proceed toward the good and turn away from bad.

5. The ring in the center symbolizes the eternity of universe or the eternal nature of the soul. As a circle, it has no beginning and no end.

6. One of the hands points upwards, indicating that there is only one direction to choose in life and that is forward. The other hand holds a ring and some interpreters consider that as the ring of covenant and used in wedding ceremonies representing loyalty and faithfulness which is the basis of Zartosht’s philosophy. This means when a true Iranian gives a promise, it is like a ring and it cannot be broken.

Since, the ring of covenant which located in the center of the Faravahar’s trunk is the symbol of the immortality of the spirit, it can be inferred that more human beings try to promote their own Faravahar, more their spirit will be elevated in the other world after they pass away. For that reason, ancient Iranians would never mourn at the death of their beloved ones, because they would believe that their spirit will be elevated to a higher level in the other world. On the basis of one’s Faravahar, everybody is responsible for his/her own deed.

One thought on “The significance of the Faravahar or Asho Farohar”