Eternity in an Hour – William Blake 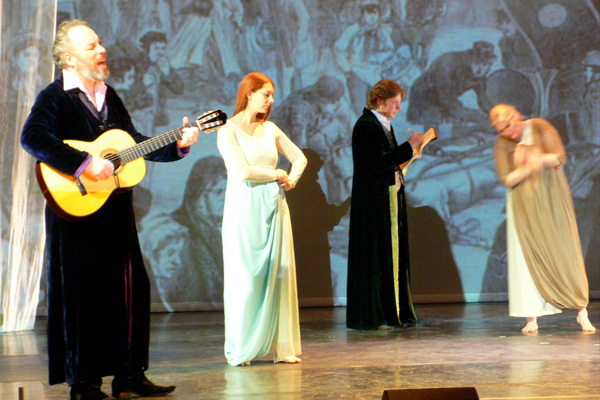 Eternity in an Hour

Based on the successful West End show ‘William Blake’s Divine Humanity’, the centre-piece of London’s Blake 250 Festival in 2007, this one-act multi-media drama premiered at the Helsinki Festival in 2008 and has since performed at the the National Theatre of Switzerland in Basel and Geneva, the New York International Theatre Festival and in Milan, Perugia and Rome.

The show lasts 75 minutes, fusing original live music, dance and drama with moving visual projection.  A hit with theatre audiences across Europe, ‘Eternity in an Hour’ is ideal for schools wishing to experience directly the life, work and unique vision of William Blake.

Not only is William Blake the foremost religious painter that Britain has ever produced; he is also the father of English Romanticism, the instigator of the English Gothic revival and one of the greatest poets of the English language.

The show embodies the universal ideal of the ‘Culture of the Spirit’, expressing the deepest and most vibrant aspects of our common humanity through the genius words and images of William Blake.