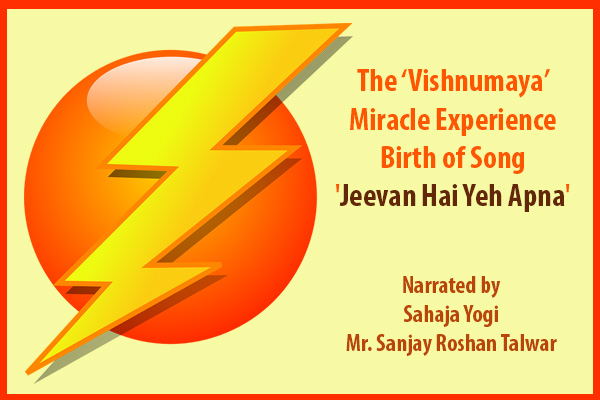 It was winter of 1986. November. My father got a call from Shree Mataji to meet her at Jaipur. She specifically asked him to bring me along. I was busy in those days with my new job in Delhi. But on my father’s insistence both my wife Aradhana & I decided to drive my parents to Jaipur. We were to reach Jaipur before the arrival of Shree Mataji, and the Receive her. My father was then the SY Leader for Delhi. We had had an excellent tour of Kolkata with Shree Mataji the previous winter.

We felt blessed to reunite with her again at Jaipur. We were asked to stay in the same house where Shree Mataji would be staying, ie. with the Jaipur leader Mrs Pardal. ironically, Mrs Pardal had studied in college with my Mother in Delhi and so they were already known to each other. We were welcomed to her home, as we all set into preparations to receive Shree Mataji. Over 40 Yogi’s has collected from Jaipur, Delhi & nearby places to welcome Shree Mataji. This was my one trip to Jaipur that changed my life forever…..

It was a cold December afternoon at Mrs Pardal’s house at Jaipur. Mother had arrived. 40 yogies had collected in Mrs Pardal’s drawing room. Mother came and sat on her chair, while all the yogies sat before her on the ground and started to meditate. Mother had closed her eyes. There was pin drop silence. I was a bit late getting ready in my room, which was one floor above. The stairs we’re spiral and came down directly into the drawing room.

When I quickly approached the drawing room from my room upstairs, I had no choice but to make my way downwards very stealthily so as not to disturb the silence. There was a big candle lit at the base of the staircase with it’s frick small and steady.

Now as I approached my way down the stairs, I could see Shree Mataji sitting right in front with her eyes closed. I thought to myself ” good, I may not get noticed coming late”. Without making even a whiff of a sound, very slowly I descended the stairs. While I was just about midway, suddenly there was a big noise coming from the right side of the room. It sounded like a roaring volcano. Quite deafening. Then I could not believe what I saw……

A big ball of fire entered the room from within it’s wall on the right side and moved clockwise very fast swirling through the room just above the heads of all the Yogi’s and travelled to the left side of the room before disappearing through the wall. The real moment during this movement is, that when the ball of fire came to the center of the room, It was exactly between me and Shree Mataji’ direct eye contact! The candle at that moment had flared up with it’s flame really very big and elongated with big black soot coming out.

Just at that moment Shree Mataji opened her eyes. Her look was like Maha Kali. Her eyes became huge and staring at the ball of fire. Then as it moved towards the left , so did Shree Mataji’s head turn to watch it disappear. I watched this scene absolutely stunned. When the fire ball left, there was pin drop silence. Shree Mataji moved her eyes towards me, then towards the candle. The candle flame became very small Her terrifying look of the eyes became soft and then She slowly closed her eyes.

Something strange had just happened. The most amazing thing was, that no one among the 40 Yogis even stirred or reacted, as if nothing had happened. As if they never saw or heard anything. All I can say is, that it was unbelievable, unfathomable.

I quickly descended the remaining stairs, from where I has stood frozen in shock, and settled down among the yogies with my eyes closed.

After about 10 mins, the meditation ended. But those 10 mins to me felt like ages had passed. My mind was so perplexed, that I immediately moved ahead till I could get right at the feet of Shree Mataji. By then people had started moving forward to get closer to Mother, while some had already started talking to Her.

There was a lot of noise in the room, as Mother was attending to each Yogi with their questions. Then all of a sudden, Mother noticed me sitting quietly at her feet. She bent a little towards me, as I moved forward within hearing distance. Then she cupped her hands on my ear and said softly. ” I saw it. You did too, but no one else did. As it was only meant for you. You had the Darshan of the deity VISHNU MAYA. She came to clear your left Vishuddhi. Don’t worry, I have taken care of it all. But remember, She is your predominant Deity. I want you to start singing in Sahaja yoga. The time has come.”

She blessed me as I bowed at her feet. No one heard this conversation. It was just between me & Mother.

I got this feeling that there was something very special between us. We now had a secret to share. I was very excited. I ran to my room, and wrote a poem. Within 5 mins I returned to Her feet. She saw me coming and said loudly. ”  he has written a song”. Then I sat down at her feet and read out my poetry. Mother went to correct it, rather almost changed it around and then told me, ” Now you can sing it in the public Program tomorrow”

I sang that song on the Public Program. That was my first ever performance in a Public Program, as Mother sat on and listened. Later She gave Realisation to all the seekers.

Hope you all will enjoy it. 2 complete verses were written by Shree Herself. The other two she used me as the instrument. Even today this song stands tall, as meaningful as ever. She was keen that it be sung at all public programs. I’m sure you all will spread the word, as Mother would certainly be smiling wherever she is ( mostly in our hearts) when yogies use this song to spread Sahaja yoga. This song has been re-recorded only after I knew it could now be composed by me. Earlier it was fitted into a film tune.

Shree Mataji later encouraged me to start composing songs as well. Hence started this unique combination of writing, composing & singing. Could only have happened by HER divine grace.

If you go to my website www.sanjayroshantalwar.com, then click on Album. Locate the 2 Albums Adi Shakti Pujan Vol 1 & 2. In one of the albums you will find this song.

The lyrics and English meanings of every song are in the website can be downloaded for free.

It was one of my first recordings done in 1987 at a Studio in Paharganj inside a blind school. In those times the studio used to do recording in one length. No retakes. The musicians would play live and I my singing recorded direct. It was Rs 100 per hour. Shree Mataji wanted me to record all of the poetry I wrote and then bring it to Ganapatiphule, where she was very keen to first introduce Sahaj Bhajan in tape to all the yogies.

This song was one of the 24 songs I recorded after completing my tour of Rajasthan, Pune & Mumbai with Mother. Because that eventful day at Jaipur was just the beginning. From the very next day onwards, She had it all worked out. She asked me to give her company for the remaining part of her stay in Rajasthan, and later to travel with Her to Pune & Mumbai. So by the end of such wonderful travails with the Adi Shakti, 24 songs had been written.

She wanted all to be recorded professionally in studio and then be made available to all Yogi’s in Ganapatiphule. That’s how music entered the Sahaj Arena with her complete involvement and blessings. My first recordings were released in the name of Adi Shakti Puja Vol 1 & Vol 2. There were 12 songs in each volume. At that time I was only writing poems, and with Divine permission, I was allowed to use these lyrics on popular Hindi film songs. These all you will find in Adi Shakti Pujan Vol 1 & 2.

Next I will share the journey that followed after 2 days at Jaipur. This is one of my most memorable journeys of life – with the Adi Shakti. We travelled together in the same car for over 13 hours into the interiors of Rajasthan. Coming back soon with this yet another amazing experience, rather a trail of experiences one after another for several days with Her…… 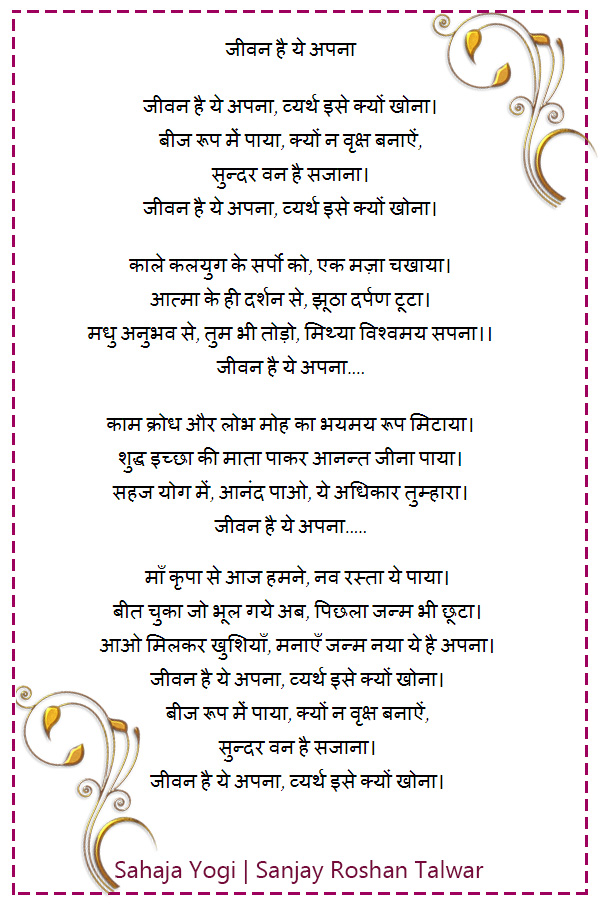 5 thoughts on “The ‘Vishnumaya’ Miracle Experience”