But we are from different religions!- A Sahaja Yoga Short Conversational Series 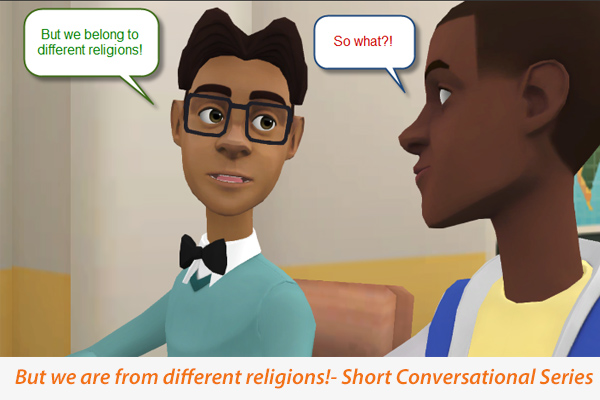 But we are from different religions!

Scene – Walking through the college premises

NSY : Hey, the other day you were telling me to attend the meditation session and you even asked me to bring along Frank and Siddhartha.

SY: Yes, Of course I did. I remember.

NSY: But….but how can you accommodate all of us in the same session…in the same hall where you hold the meditation?

SY: Why? What is the problem? It is a huge hall don’t worry dear!

NSY : No no – I mean three of us – meaning you know I am a Hindu, Frank is a Christian and Siddharth follows Buddhism – so how can you possibly invite all of us together for the same session, same time and same hall?!

NSY: yea! How will you address our different beliefs and worshiping ways – under a single roof?

SY: Hmm..do you remember couple of months ago we had a case of food poisoning in our college canteen and 15 to 20 students were rushed to the hospital?

NSY: Of course I remember, I was one of them bro….you were absent that day – you had gone attending some Seminar – otherwise you too would have been rushed to the Emergency ward!

SY: Yeah! Strangely the seminar was preponed and I had to absent without prior notice – it was a very important seminar where we were taught about some clearing techniques of our subtle system.

SY: Oh – I will come to it later. So many of you were rushed to the Emergency Ward of the City Hospital right?

NSY: Yeah! Many of us – but why are you asking?

SY: Just wondering how the doctors must have attended to so many students belonging to different caste, creed, religion, race!

NSY: What are you talking about? What has caste, creed or religion got to do with our treatment?! We were all given a quick stomach wash, then we were given electrolyte enhanced liquids so that we don’t get dehydrated!

SY; Really!? Strange – isn’t it? Imagine the same treatment for all the students – irrespective of their beliefs and religion!

NSY: What is so strange in it? It is normal!

SY: Is it? So the doctors could treat everyone with the same prescription?

NSY: Of course! Where is the need to give different prescriptions? The digestive system is the same for all!

NSY: But how is that possible? I have never heard of this system ever!

SY: So you will hear about it soon – the reason I am taking you to the meditation center!

NSY: You do?! You worship all Gods huh!?

SY: Yes, we do. They are angels, incarnations who were born in different regions and taught people the ways of life – and eventually the way to manifest their own divinity according to their level of understanding. Humans have mutilated many religious scriptures according to their convenience – we all know that – but truth has it’s own way to reveal itself. And it is revealed through meditation under the guidance of a Sadhguru – the true spiritual master!

NSY – hmm…how will we know that the Guru is the sadhguru and not some cheat? Don’t mind my saying so – but you know about the frauds all around us in the garb of Godmen – but eventually they turn out to be criminals!

SY – There are doctors who have passed from the Medical college and are able to treat the patients well – whereas some doctors cheat people and steal their kidneys and eyes too – and there are also others who have no medical degree but have acquired a fake Doctor’s certificate and treating people – which doctor would you approach?

NSY – Obviously the one who has successfully treated many patients, who has a clean record!

SY – So dear – worry not! I am taking you to the Spiritual Master whose meditational technique is practiced in over 150 countries – people from diverse cultures and religions have embraced this technique to heal their bodies, mind, soul and spirit! Trust me bro – you are in good hands!

NSY – Wow – you have a way with words…I am becoming more excited that ever!

SY – Good – visit our website and read about the technique – www.sahajayoga.org. If you have questions – I am always there for you!

NSY – Thanks Bro – it is always nice and calming to talk to you!

SY – You are most welcome bro – only too glad to be of some help to people – especially those who are seeking higher divine knowledge!!

Animation of the above skit – done by Sahaja Yogi, Aditya Chourasiya

2 thoughts on “But we are from different religions!- A Sahaja Yoga Short Conversational Series”