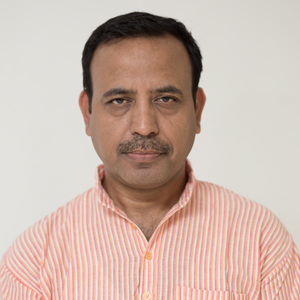 Arvind Pandey is a graduate from NSD (National School of Drama- Delhi). After his graduation from NSD, Arvind took up a research assignment on “Method Acting”- It’s development and scope for implementation in Indian films and theatre” under the aegis of NSD.

Arvind has also done a short-term film appreciation course from the Film and TV Institute of India (FTII), Pune.

As a Theater director himself, he has been credited with adaptation and direction of more than 15 plays in different Indian languages. His love for direction transcends the stage to find expression in about dozen of his short films that he directed for acting students in different film schools where he has been teaching for long.

He has penned stories and screenplays for many feature length films.

Himself having acted in many T.V serials and films like ‘Split Wide open’, ‘Bhopal Express’, ‘Veer Sawarkar’, ‘Dr. Ambedkar’ to name a few, his experience and expertise has made him a favorite with many Bollywood stars who have sought his tutelage in the fine art of acting.

He is currently the Head of acting department at the prestigious film school “Whistling Woods International”.

He has had the rare distinction to teach actors, directors and screen writers at almost all top ranking film schools in the country such as FTII Pune, SRFTII Kolkata, WWIL Mumbai etc.

Directed 15 full length plays in Hindi and some other Indian languages and dialects. Some of the plays are:

Besides, directed scores of short films to give students exposure to media acting at various film institutes around the country.

Produced and directed plays for my drama company ’The Studio Three Theatre’.

Acted major roles in about 30 plays. Some of the plays from the world classic with the eminent directors of India and abroad are listed below:

Taught acting and managed day to day administrative functioning of the acting department at the ‘Whistling Woods International’ Mumbai [2006- 2010].

A visiting faculty and a member of student selection panel of the “Film and Television Institute of India Pune”.  Was part of the panel that designed 2 years acting course for the FTII.

Trained some of the well-known faces of the Mumbai Film World.

Conducted workshops for ensemble cast for some successful Hindi films.

Adapted a few plays by adopting the process of improvisation with actors in various languages and dialects and directed them too.

Written scores of plays for children.

Four stories/screenplays written by me were ‘short listed’ at various ‘Screenwriting Labs’.

Have acted in about 6 feature films, with the likes of- Dev Benegal, Mahesh Mathai,  Dr. Jabbar Patel and a few others.

At present associated with the ‘Whistling Woods International’ Mumbai, as a senior faculty in the department of acting.

Having started my acting career with our centuries old folk theatre and subsequently graduating to the amateur theatre led me to join “The National School Of Drama”. NSD`s experience opened up a new horizons as an actor, which led me to take up a research project on the “Method Acting”. During this research I interacted with the eminent theatre and film personalities of India and abroad, which helped me to get in-depth knowledge of Method acting and its practical application.

I was quite amazed by the views of some Indian theatre and film practitioners when they all commonly agreed that in India we don’t have a well-formulated acting training procedure for the modern actor. However they also strongly believed that we have an excellent training procedure when it comes to our classical and folk drama forms, but that doesn’t serve the purpose when we handle the contemporary text specifically Realistic and Media acting. Which in fact validated my own observations and conclusions about the contemporary scenario of acting in the sub continent.

These ideas inspired me to join the “Lee Strasberg Theatre & Film Institute”, Which gave me an in-depth knowledge of METHOD ACTING and the acting method in general practiced successfully all over.

After returning from the USA I started sharing METHOD with the Indian acting fraternity. My last twenty four years of experience as a teacher and actor in cinema, theatre & T.V helped me to evolve with this method, the results so far have been path breaking and quite encouraging.

However, working closely with Mr. Naseeruddin Shah as an actor and teacher for several years, helped me immensely to understand the nuances of this methodology better, specially its practical application. Thus, brought about a completion to my quest for acting training.